A hedge fund is an investment fund that pools capital from accredited investors or institutional investors and invests in a variety of assets, often with complex portfolio-construction and risk management techniques.[1] It is administered by a professional investment management firm, and often structured as a limited partnership, limited liability company, or similar vehicle.[2][3] Hedge funds are generally distinct from mutual funds, as their use of leverage is not capped by regulators, and distinct from private equity funds, as the majority of hedge funds invest in relatively liquid assets.[4][5]

The term “hedge fund” originated from the paired long and short positions that the first of these funds used to hedge market risk. Over time, the types and nature of the hedging concepts expanded, as did the different types of investment vehicles. Today, hedge funds engage in a diverse range of markets and strategies and employ a wide variety of financial instruments and risk management techniques.[3]

Hedge funds are made available only to certain sophisticated or accredited investors, and cannot be offered or sold to the general public.[1] As such, they generally avoid direct regulatory oversight, bypass licensing requirements applicable to investment companies, and operate with greater flexibility than mutual funds and other investment funds.[6] However, following the financial crisis of 2007–2008, regulations were passed in the United States and Europe with intentions to increase government oversight of hedge funds and eliminate certain regulatory gaps.[7]

Hedge funds have existed for many decades and have become increasingly popular. They have now grown to be a substantial fraction of asset management,[8] with assets totaling around $3.235 trillion in 2018.[9]

Hedge funds are almost always open-ended, and allow additions or withdrawals by their investors (generally on a monthly or quarterly basis).[1] The value of an investor’s holding is directly related to the fund net asset value.[10]

Many hedge fund investment strategies aim to achieve a positive return on investment regardless of whether markets are rising or falling (“absolute return“). Hedge fund managers often invest money of their own in the fund they manage.[11][12] A hedge fund typically pays its investment manager an annual management fee (for example, 2% of the assets of the fund), and a performance fee (for example, 20% of the increase in the fund’s net asset value during the year).[1] Both co-investment and performance fees serve to align the interests of managers with those of the investors in the fund. Some hedge funds have several billion dollars of assets under management (AUM).

The word “hedge”, meaning a line of bushes around the perimeter of a field, has long been used as a metaphor for placing limits on risk.[13] Early hedge funds sought to hedge specific investments against general market fluctuations by shorting the market, hence the name.[14]:4 Nowadays, however, many different investment strategies are used, many of which do not “hedge risk”.[14]:16–34[15]

During the US bull market of the 1920s, there were numerous private investment vehicles available to wealthy investors. Of that period the best known today is the Graham-Newman Partnership, founded by Benjamin Graham and his long-time business partner Jerry Newman.[16] This was cited by Warren Buffett in a 2006 letter to the Museum of American Finance as an early hedge fund,[17] and based on other comments from Buffett, Janet Tavakoli deems Graham’s investment firm the first hedge fund.[18]

The sociologist Alfred W. Jones is credited with coining the phrase “hedged fund”[19][20] and is credited with creating the first hedge fund structure in 1949.[21] Jones referred to his fund as being “hedged”, a term then commonly used on Wall Street to describe the management of investment risk due to changes in the financial markets.[22]

In the 1970s, hedge funds specialized in a single strategy with most fund managers following the long/short equity model. Many hedge funds closed during the recession of 1969–70 and the 1973–1974 stock market crash due to heavy losses. They received renewed attention in the late 1980s.[20] 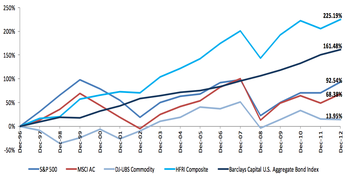 During the 1990s, the number of hedge funds increased significantly, with the 1990s stock market rise,[19] the aligned-interest compensation structure (i.e., common financial interests) and the promise of above high returns[23] as likely causes. Over the next decade, hedge fund strategies expanded to include: credit arbitrage, distressed debt, fixed income, quantitative, and multi-strategy.[20] US institutional investors such as pension and endowment funds began allocating greater portions of their portfolios to hedge funds.[24][25]

During the first decade of the 21st century hedge funds gained popularity worldwide, and by 2008 the worldwide hedge fund industry held US$1.93 trillion in assets under management (AUM).[26][27] However, the 2008 financial crisis caused many hedge funds to restrict investor withdrawals and their popularity and AUM totals declined.[28] AUM totals rebounded and in April 2011 were estimated at almost $2 trillion.[29][30] As of February 2011, 61% of worldwide investment in hedge funds came from institutional sources.[31]

In June 2011, the hedge fund management firms with the greatest AUM were Bridgewater Associates (US$58.9 billion), Man Group(US$39.2 billion), Paulson & Co. (US$35.1 billion), Brevan Howard (US$31 billion), and Och-Ziff (US$29.4 billion).[32] Bridgewater Associates had $70 billion in assets under management as of 1 March 2012.[33][34] At the end of that year, the 241 largest hedge fund firms in the United States collectively held $1.335 trillion.[35] In April 2012, the hedge fund industry reached a record high of US$2.13 trillion total assets under management.[36] In the middle of the 2010s, the hedge fund industry experienced a general decline in the “old guard” fund managers. Dan Loeb called it a “hedge fund killing field” due to the classic long/short falling out of favor because of unprecedented easing by central banks. The US equity market correlation became untenable to short sellers.[37]

In July 2017, hedge funds recorded their eighth consecutive monthly gain in returns with assets under management rising to a record $3.1 trillion.[38]