The Art Institute of Chicago, founded in 1879 and located in Chicago‘s Grant Park, is one of the oldest and largest art museums in the United States. Recognized for its curatorial efforts and popularity among visitors, the museum hosts approximately 1.5 million guests annually.[2] Its collection, stewarded by 11 curatorial departments, is encyclopedic, and includes iconic works such as Georges Seurat‘s A Sunday on La Grande Jatte, Pablo Picasso‘s The Old Guitarist, Edward Hopper‘s Nighthawks, and Grant Wood‘s American Gothic. Its permanent collection of nearly 300,000 works of art is augmented by more than 30 special exhibitions mounted yearly that illuminate aspects of the collection and present cutting-edge curatorial and scientific research.

As a research institution, the Art Institute also has a conservation and conservation science department, five conservation laboratories, and one of the largest art history and architecture libraries in the country—the Ryerson and Burnham Libraries.

The growth of the collection has warranted several additions to the museum’s original 1893 building, which was constructed for the World’s Columbian Expositionof the same year. The most recent expansion, the Modern Wing designed by Renzo Piano, opened in 2009 and increased the museum’s footprint to nearly one million square feet, making it the second-largest art museum in the United States, after the Metropolitan Museum of Art.[3] The Art Institute is associated with the School of the Art Institute of Chicago, a leading art school, making it one of the few remaining unified arts institutions in the United States.

In 1866, a group of 35 artists founded the Chicago Academy of Design in a studio on Dearborn Street, with the intent to run a free school with its own art gallery. The organization was modeled after European art academies, such as the Royal Academy, with Academicians and Associate Academicians. The Academy’s charter was granted in March 1867.

Classes started in 1868, meeting every day at a cost of $10 per month. The Academy’s success enabled it to build a new home for the school, a five-story stone building on 66 West Adams Street, which opened on November 22, 1870.

This 1893 sketch of the then new Art Institute of Chicago shows most of today’s Grant Park still submerged under Lake Michigan, with the railroad tracks running along the shoreline behind the Museum

In 1882, the Chicago Academy of Fine Arts changed its name to the current Art Institute of Chicago and elected as its first president the banker and philanthropist Charles L. Hutchinson, who “is arguably the single most important individual to have shaped the direction and fortunes of the Art Institute of Chicago”[4]:5 Hutchinson was a director of many prominent Chicago organizations, including the University of Chicago,[5] and would transform the Art Institute into a world-class museum during his presidency, which he held until his death in 1924.[6] Also in 1882, the organization purchased a lot on the southwest corner of Michigan Avenue and Van Buren Street for $45,000. The existing commercial building on that property was used for the organization’s headquarters, and a new addition was constructed behind it to provide gallery space and to house the school’s facilities.[4]:19 By January 1885 the trustees recognized the need to provide additional space for the organization’s growing collection, and to this end purchased the vacant lot directly south on Michigan Avenue. The commercial building was demolished,[7] and the noted architect John Wellborn Root was hired by Hutchinson to design a building that would create an “impressive presence” on Michigan Avenue,[4]:22–23 and these facilities opened to great fanfare in 1887.[4]:24

With the announcement of the World’s Columbian Exposition to be held in 1892–93, the Art Institute pressed for a building on the lakefront to be constructed for the fair, but to be used by the Institute afterwards. The city agreed, and the building was completed in time for the second year of the fair. Construction costs were met by selling the Michigan/Van Buren property. On October 31, 1893, the Institute moved into the new building. For the opening reception on December 8, 1893, Theodore Thomasand the Chicago Symphony Orchestra performed. From the 1900s (decade) to the 1960s the school offered with the Logan Family (members of the board) the Logan Medal of the Arts, an award which became one of the most distinguished awards presented to artists in the US.

Between 1959 and 1970, the Institute was a key site in the battle to gain art and documentary photography a place in galleries, under curator Hugh Edwards and his assistants.

As Director of the museum starting in the early 1980s, James N. Wood conducted a major expansion of its collection and oversaw a major renovation and expansion project for its facilities. As “one of the most respected museum leaders in the country”, as described by The New York Times, Wood created major exhibitions of works by Paul Gauguin, Claude Monet and Vincent van Gogh that set records for attendance at the museum. He retired from the museum in 2004.[8]

In 2006, the Art Institute began construction of “The Modern Wing”, an addition situated on the southwest corner of Columbus and Monroe.[9] The project, designed by Pritzker Prize winning architect Renzo Piano, was completed and officially opened to the public on May 16, 2009. The 264,000-square-foot (24,500 m2) building makes the Art Institute the second-largest art museum in the United States. The building houses the museum’s world-renowned collections of 20th and 21st century art, specifically modern European painting and sculpture, contemporary art, architecture and design, and photography. In 2014, travel review website and forum, Tripadvisor, reviewed millions of travelers’ surveys and named the Art Institute the world’s best museum.[10] It has remained a top three museum through 2016.[11]

In April 2015, it was announced that the museum received perhaps the largest gift of art in its history.[12] Collectors Stefan Edlis and Gael Neeson donated a “collection [that] is among the world’s greatest groups of postwar Pop art ever assembled.”[13] The donation includes works by Andy Warhol, Jasper Johns, Cy Twombly, Jeff Koons, Charles Ray, Richard Prince, Cindy Sherman, Roy Lichtenstein and Gerhard Richter. The museum agreed to keep the donated work on display for at least 50 years.[13] In June 2018, the museum received a $50 million donation, the largest single announced monetary donation in its history.[14]

Further information: List of painters in the Art Institute of Chicago

The collection of the Art Institute of Chicago encompasses more than 5,000 years of human expression from cultures around the world and contains more than 300,000 works of art in 11 curatorial departments. The museum holds works of art ranging from early Japanese prints to the art of the Byzantine Empire to contemporary American art. It is principally known for one of the United States’ finest collection of paintings produced in Western culture.[15][16]

African Art and Indian Art of the Americas

The Art Institute’s African Art and Indian Art of the Americas collections are on display across two galleries in the south end of the Michigan Avenue building. The African collection includes more than 400 works that span the continent, highlighting ceramics, garments, masks, and jewelry.[17]

The Amerindian collection includes Native North American art and Mesoamerican and Andean works. From pottery to textiles, the collection brings together a wide array of objects that seek to illustrate the thematic and aesthetic focuses of art spanning the Americas.[18]

The Art Institute’s American Art collection contains some of the best-known works in the American canon, including Edward Hopper‘s Nighthawks, Grant Wood‘s American Gothic, and Mary Cassatt‘s The Child’s Bath. The collection ranges from colonial silver to modern and contemporary paintings.

Nighthawks was originally purchased by the museum in 1942 for $3,000;[19][20][21] its acquisition “launched” the painting into “immense popular recognition.”[22] Considered an “icon of American culture”,[19][23] Nighthawks is perhaps Hopper’s most famous painting, as well as one of the most recognizable images in American art.[24][25][26] American Gothic has been in the museum’s collection since 1930 and was only just recently loaned outside of North America for the first time in 2016.[27] Wood’s painting depicts what has been called “the most famous couple in the world,” a dour, rural-American, father and daughter. It was entered into a contest at the Art Institute in 1930, and although not a favorite of some, it won a medal and was acquired by the museum.[28][29]

The Art Institute’s ancient collection spans nearly 4,000 years of art and history, showcasing Greek, Etruscan, Roman, and Egyptian sculpture, mosaics, pottery, jewelry, glass, and bronze as well as a robust and well-maintained collection of ancient coins. There are around 5,000 works in the collection, offering a comprehensive survey of the ancient and medieval Mediterranean world, beginning with the third millennium B.C. and extending to the Byzantine Empire.[30] The collection also holds the mummy and mummy case of Paankhenamun.[31][32]

The Department of Architecture and Design holds more than 140,000 works, from models to drawings from the 1870s to the present day. The collection covers landscape architecture, structural engineering, and industrial design, including the works of Frank Lloyd Wright, Ludwig Mies van der Rohe, and Le Corbusier.[33]

The Art Institute’s Asian collection spans nearly 5,000 years, including significant works and objects from China, Korea, Japan, India, southeast Asia, and the Near and Middle East. There are 35,000 objects in the collection, showcasing bronzes, ceramics, and jades as well as textiles, screens, woodcuts, and sculptures.[34] One gallery in particular attempts to mimic the quiet and meditative way in which Japanese screens are traditionally viewed. 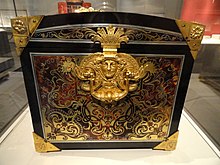 The Art Institute’s collection of European decorative arts includes some 25,000 objects of furniture, ceramics, metalwork, glass, enamel, and ivory from 1100 A.D. to the present day. The department contains the 1,544 objects in the Arthur Rubloff Paperweight Collection and the 68 Thorne Miniature Rooms–a collection of miniaturized interiors of a 1:12 scale showcasing American, European, and Asian architectural and furniture styles from the Middle Ages to the 1930s (when the rooms were constructed).[35] Both the paperweights and the Thorne Rooms are located on the ground floor of the museum.